In order to avoid harms associated with alcohol consumption, in 2009 the National Institute on Alcohol Abuse and Alcoholism issued guidelines that define low-risk drinking. These guidelines differ for men and women: no more than four drinks per day, and 14 drinks per week for men, and no more than three drinks per day, and seven drinks per week for women. A study of how well college students adhere to these limits has found that female college student drinkers exceed national drinking guidelines for weekly drinking more frequently than their male counterparts.

Results will be published in the October 2013 issue of Alcoholism: Clinical & Experimental Research and are currently available at Early View.

“Recommended drinking limits are lower for women than for men because research to date has found that women experience alcohol-related problems at lower levels of alcohol consumption than men,” explained Bettina B. Hoeppner of the Massachusetts General Hospital Center for Addiction Medicine, an assistant professor of psychology at Harvard Medical School as well as corresponding author for the study.

“It is always important to take gender into account when studying health or risk behaviors,” added Melissa A. Lewis, associate professor in the department of psychiatry and behavioral sciences at the University of Washington. “Even if you hold weight constant, there are differences in terms of how alcohol affects men and women. For example, men have more of an enzyme in the stomach – a gastric alcohol dehydrogenase – that lowers the amount of alcohol that makes it into the bloodstream. Also, women have less blood going through the bloodstream than a man at the same weight, so alcohol gets more concentrated in the bloodstream.”

For this study, Hoeppner and her colleagues asked 992 college students (575 females, 417 males) to report their daily drinking habits on a biweekly basis, using web-based surveys throughout their first year of college.

“We found that female college-student drinkers exceeded national drinking guidelines for weekly drinking more frequently than their male counterparts,” said Hoeppner. “Weekly cut-offs are recommended to prevent long-term harmful effects due to alcohol, such as liver disease and breast cancer. By exceeding weekly limits more often than men, women are putting themselves at increased risk for experiencing such long-term effects.”

“These findings contribute to our understanding of how populations adhere to national drinking guidelines,” said Hoeppner. “Specifically, it examines college student drinkers, where adherence to weekly drinking limits has not been examined before. Generally, ‘binge drinking’ receives more attention when examining college student drinking, however, for long-term health, it is also important to examine the establishment of drinking patterns that may lead to long-term harmful effects, not just short-term effects.”

“These findings highlight the need for prevention efforts to focus on both daily and weekly limits to reduce harm from short- and long-term negative consequences related to alcohol use,” said Lewis. “Current preventative interventions often do not focus on weekly drinking recommendations, which is important and a warranted area of future research.

Hoeppner agreed. “Our results might motivate clinicians to address weekly drinking limits and the potential for long-term alcohol related harm with their patients,” she said. “The reasons that many college students exceed these weekly limits are unclear. It is possible that lack of awareness of the guidelines and possible consequences of exceeding them contributes to these high rates. If so, clinicians might reduce harm by educating their college-student patients about the guidelines and the harm they seek to prevent, especially their female patients. Similarly, researchers and clinicians designing prevention/intervention programs might find it useful to address weekly drinking limits in their programs, both to reduce incidence rates thereof, and to identify the reasons for exceeding these guidelines.” 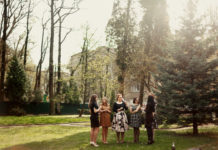